Home About Us Latest News The History of SCHMIDT

The History of SCHMIDT

Searching through the “help wanted” column of a newspaper, an advertisement attracted George T. Schmidt's attention. The John S. Weber shop was looking for an engraving apprentice. George was just 14 years old, he convinced his father that the $50 training fee necessary to learn the engraving profession was a sound investment. And so began the inspiring story of his business career.

After only 6 months of training, George was put on a salary of $3.00 per week. After several years with the Weber Company, George felt the urge to move on in quest of more experience. He accepted a job with the F.C. Christy Company, engravers at 224 East Washington Street.

On March 15, 1887, George was rehired to manage the John S. Weber Shop. In parting with the Christy Company, his services were rewarded by a written recommendation given to him by Mr. Christy himself. This became a prized and cherished document. 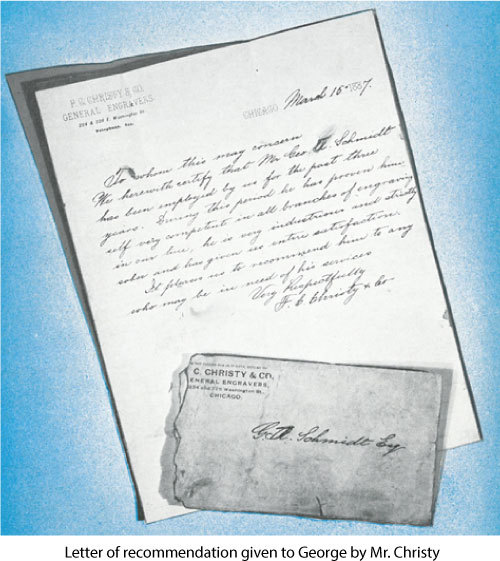 During the next eight years, George worked hard and saved consistently. At age 30, his energy, initiative, and organizing ability was such that on October 16, 1895, he purchased the entire assets of John S. Weber for $300. This was the beginning of Geo. T. Schmidt, Incorporated, an organization known today all over the world.

George T. Schmidt was now established in the engraving business. All the striving and stirring of ambition, the self-education, the step by step progress in character building, and business training had reached the solid climax toward which his life had been directed from the beginning.

The first shop was located in rented space in downtown Chicago. Business grew consistently requiring two changes of location from 1895 to 1920. 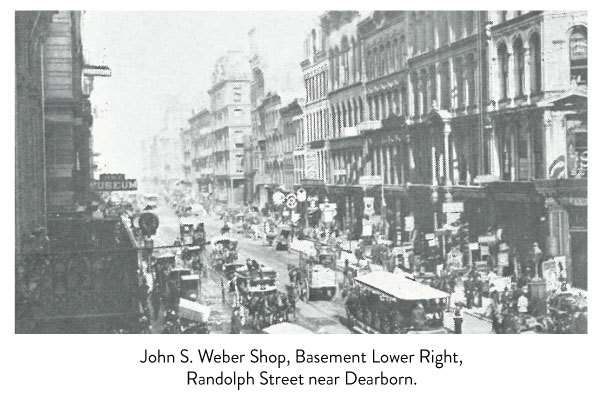 A third move was made on February 20, 1920, when a new page was written in the history of George T. Schmidt. On this day, ground was broken for the erection of a two-story building at 4100 Ravenswood Avenue.

New and modern machinery was installed, for the company was now manufacturing marking machinery on a small scale in addition to steel stamps, lettering, and embossing dies. Heavier equipment was necessary for enlarging the scope of machine manufacturing.

In the 30s and 40s despite the economic and political struggles the nation was facing, Geo. T. Schmidt Incorporated was thriving. The business was growing, the manufacturing plant was expanding, and new technologies were unveiled. The 50s and 60s brought even more expansion causing the company to relocate once again to an even larger manufacturing facility at 6250 West Howard Street.

The company spent several decades at this location growing the business and continuing to expand on its wide range of product offerings. What began as an engraving tool and die shop, became an innovative corporation offering the largest range in marking technology.

The company was expanding into the laser engraving and stylus machine markets. In the 1980s, the successful growth of the company brought on yet another relocation to where the company still currently manufactures from today.

Geo. T. Schmidt, Inc continues to grow and prosper on the same fundamental principles started by George back in 1895; quality products, specialized knowledge in marking, and enthusiastic service to our many customers.